Posted in: History of Timekeeping
By Klockit Team
More from this author

The great escapement ensures clock functions are carried out correctly, follow this mechanism though history and learn about its uses today.

In the world of horology, the great escapement has been compared to the human heart. Like the heart, it ensures that essential functions are carried out correctly. The mechanism, which consists of an anchor and wheel, uses a pendulum or balance effect to regulate periodic impulses and keep the clock or watch going.

Modern timekeeping devices have batteries or electrical connections that help regulate their activities, but certain decorative versions, such as grandfather clocks and cuckoo clocks, continue to be escapement-driven.

Escapements Throughout the Centuries

Dozens of escapement types have been produced throughout the centuries. They include:

Not all of them caught on, but each one was developed with the intention of improving accuracy and reliability.

The earliest mechanical escapement appeared in Europe during the 13th century. Known as the verge escapement, it consisted of a crown-shaped gear wheel driven by a weight and regulated by a pair of metal pallets that alternately stopped gear teeth. The pallets were mounted on a vertical shaft called the verge, and their oscillation speed was controlled by the foliot, a crossbar with two small weights. Changing the position of the weights would speed up or slow down the oscillations. 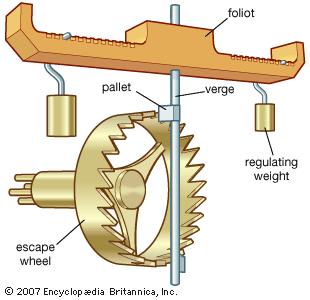 This mechanism was built into large tower clocks that dominated town squares, monasteries, and cathedrals throughout the continent. Although superior to the water clocks that had preceded them, an inability to regulate them with any degree of precision made these clocks only semi-accurate.

British scientist Robert Hooke has been credited with designing and applying the first anchor escapement in London in 1657. Clockmaker, William Clement, who used this escapement when he invented the grandfather clock around 1680, would later argue that he was the one who originally conceived the design. 1>

Hailed as more accurate than the verge escapement, it consisted of a heavily ridged wheel and an anchor that swayed above it while connected to a pendulum. The anchor’s plates alternately caught onto the wheel’s teeth, generating regulated movement. It became the standard escapement for pendulum clocks.

Also known as the deadbeat escapement, the Graham escapement built upon the key strengths of the anchor version. It had a pallet fork, escape wheel, and a pendulum. The escape wheel moves clockwise, driven by the power train, while the pendulum and pallet fork swing together. George Graham, who invented this new configuration, built such an accurate and reliable design that nearly 300 years later, his escapement is still being used in grandfather clocks.

Invented by English clockmaker, Thomas Mudge, in the 1750s, the lever escapement is a ‘detached’ model, meaning that the balance wheel swings free of the escapement while oscillating. It uses two separate wheels, one larger than the other. The smaller one regulates the larger, which has a bar across it that moves in a see-saw motion.

Since about 1900, virtually every mechanical watch, alarm clock and other portable timepiece has used the lever escapement, for two primary reasons: its action is precise, and it is self-starting, so if anything interrupts its actions, the escapement will start again.

In 1748, escapement technology progressed further when Pierre Le Roy invented the detent model. Like the lever escapement, it had a separate wheel and self-starting capability, but less friction between the plate and escape tooth made its accuracy superior. The detent escapement was used in Marine chronometers and certain precision watches until the mid-1900s.

The gravity escapement appeared in the 18th century and was so well-received that the concept was steadily developed until the middle of the 19th century. This escapement used a spring or weight to send an impulse to the pendulum. It became the design of choice for turret clocks; unlike other escapement types, its timekeeping ability was not affected by snow, ice, and wind assailing the large clock hands. Big Ben at Westminster Abbey in London is driven by a gravity escapement mechanism. 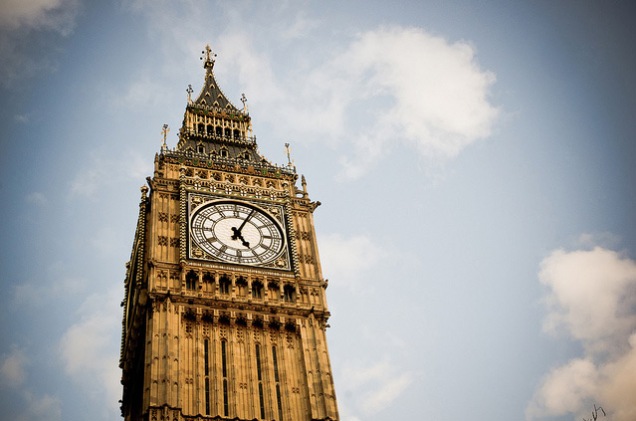 English watchmaker, George Daniels, invented the co-axial escapement around 1974. Hailed as one of the greatest horological advancements since the lever escapement, this new mechanism had a system of three pallets that separated the lock function from the impulse, eliminating sliding friction as well as the need to lubricate the pallets. (The need for regular lubrication was one of the lever escapement’s major shortcomings.)

In 1999, Swiss luxury watchmaker Omega SA commercialized the co-axial escapement when it launched the first mass-produced watch with the technology.

As new manufacturing materials and techniques appear, escapement development continues, with the ever-present goal of better accuracy and reliability. Horological specialists today are tackling the same issues that Robert Hooke and George Graham did centuries ago, a pursuit that seems destined to be timeless.

Join Klockit's email list to get 10% off your first order. Be the first to know about exclusive offers, new products, and more from Klockit.